Since bursting onto the scene in the late 1990s, comedian and actress, Mo’Nique has been a trailblazer for an array of social causes from sexual liberation, body positivity, pay equality, and more. To celebrate her birthday in this article, guest contributor Flisadam Pointer takes a lookback on her fierce history of advocacy.

Today should be a national holiday! Why is that? Well, on this day, fifty some odd years ago, Monique Angela Hicks, better known as Mo’Nique was born. Since bursting onto the scene in the late 1990s, comedian, actress, and activist Mo’Nique has been a trailblazer for an array of social causes from sexual liberation, body positivity, gender pay equality, and more. The fiery full-figured fabulous sistah from Baltimore has continuously used her platform to empower her fellow Black people. There may have been moments in which her messages may have been met with mixed emotions (most recently her bonnet comments), over time she’s proven that her advocacy for Black people more specifically Black women is from a genuine place.

With the passing of iconic figures such as Greg Tate, Virgil Abloh, DMX, and more this year alone, it is important for us as a community to give our legends their flowers while they can still smell them. So, today on her birthday I want to do just that. Here’s a lookback on Mo’Nique fierce history of advocacy. 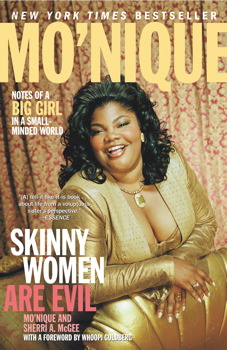 When you think of the phrase body positivity the first celebrity or entertainer to come to mind more than likely is singer and songwriter, Lizzo. From her flawless twerking while simultaneously playing the flute or bold fashion choice to wear an a**less dress at a Lakers’ game, the “Truth Hurts” singer has unapologetically embraced her body. However, since Mo’Nique’s breakout debut in the 2001 comedy special The Queens of Comedy, she has made it clear that she’s loud, large, and in-charge. Armed with her signature catch phrase “skinning b****es are evil” cleaning it up for her New York Times Bestseller Skinny Women Are Evil: Notes Of A Big Girl In A Small-Minded World, Mo’Nique was plus size and proud of it embracing every inch of her body. I admit the messaging was harsh but plus size folk across the world needed someone to champion for them and Mo’Nique proudly did just that.

This crusade would continue throughout her onscreen work most notably in her brief cameo in the 2001 film Baby Boy, 2004’s Hair Show, and 2006’s Phat Girlz. Let’s not forget her tribute to Beyoncé at the 2007 BET Awards. The nearly 3-minute lip sync choreographed piece soundtracked by the song “Deja Vu” features an array of plus size dancers killing the stage. This tribute inspired Beyoncé to hire plus size talent of her own (The Mamas).

Mo’Nique has since transitioned into the body neutrality movement made popular by fellow actress and activist Jameela Jamil as Mo’Nique has embarked on a weight loss journey documented across her social media platforms. Mo’Nique aims to maintain a healthy lifestyle to avoid potential health complications encouraging others to do the same.

Even as part of one of the highest grossing all-women led stand-up specials, previously syndicated television series, and dozens of awards (Academy Award, BAFTA, NAACP Image Award, SAG Award, BET Award to name a few) as well as nominations (Grammy and Emmy) under her belt, Mo’Nique has never been paid that of her counterparts.

In an interview with Variety she shared, “there’s never been a time that I’m aware of, that my paycheck was equal in the entertainment industry, in Hollywood”. As shocking as this may seem to some, actresses such as the late Cicely Tyson, Meryl Streep, Viola Davis and Taraji P. Henson all have at one point publicly shared how they were underpaid for some of their breakout roles.

Refusing to settle for what in her words were “crumbs” Mo’Nique rejected a $500,000 comedy special deal in 2018 with streaming platform Netflix. When asked about her choice to walk away from the offer, Mo’Nique proudly proclaimed with her resume it would be harmful for her to accept the offer as it would set the precedent for Black women coming up behind her essentially lowering the bar. As interviewers continued to push her on the subject she stood firm on her decision stating comedians Chris Rock, David Chappelle, Ellen DeGeneres and even Amy Schumer have all received millions for their special. In fact, Schumer was paid, “26 times more per show,” for her 2017 special.  Rightfully so, Mo’Nique and husband Sidney Hicks filed a formal lawsuit against the streaming platform for gender and racial discrimination asking for support from the public calling for a boycott.

In an attempt to expand upon the call to boycott, Mo’Nique went up to Power 105.1 FM’s Breakfast Club — a platform that just prior awarded her “the donkey of the day”. The now infamous interview ended with no resolve as Mo’Nique stormed out in protest of her treatment by jockey

Charlamagne tha God. Fast forward to 2020, Netflix purchases the licensing rights to Dave Chappelle’s Chappelle Show and within a week of its airing the comedian calls for a boycott as he is not receiving any financial compensation from the deal. The same outlets that shunned Mo’Nique for her calls to boycott were now praising Chappelle. Fans leap to action, with Netflix quickly removing the series while behind the scenes working out a deal with Chappelle. I guess it’s support Black women when it’s convenient. Although the lawsuit against Netflix is still pending, the progress made seems to be heading in the right direction.

As history has shown, the patriarchy doesn’t respond well to freethinkers especially if they check off the boxes Black and woman. In what feels like retaliation for her justifiable call outs, Mo’Nique began to be labeled “difficult” which fellow actress Janet Hebert eloquently shared, “calling a Black woman difficult in Hollywood is the kiss of death”.

In an interview with Steve Harvey, Mo’Nique addressed the whispers that she’s being blackballed by Oprah Winfrey, Lee Daniels, and Tyler Perry as well as the “difficult” label.  “We [my husband & manager Sidney and I] got labeled as ‘difficult’ because I said one word, ‘no’,” says Mo’Nique. What did she say no to? She refused to extend her press obligations for the film Precious outside of what she contractually agreed to for free. Although Mo’Nique had completed her media obligations, she claims nearing the end of her worldwide press run she was approached and asked to extend her travels. When asked about the financial compensation, she was told there would be no further compensation meaning she would be responsible for hair, makeup, styling and travel fees. She refused, so the mud slinging began with the public quickly chiming in.

Comedian Kevin Hart went on to reveal he in fact charges film studios for the promotion of pictures he’s featured in despite the series of leaked emails from a Sony executive calling him a “whore” for doing so. Yet, again the public and media began to quietly walked back on their claims of Mo’Nique being “Hollywood” as this was indeed proven to be the standard.

In her role as Nikki Parker on television series, The Parkers, her fearless romantic pursuits of Dorien Wilson’s character Professor Stanley Oglevee challenged traditional gender roles. Nikki Parker was a woman who knew what she wanted and she wasn’t going to sit around waiting for the man to make the first move.

As a host on the 2007 reality series Flavor of Love Girls: Charm School, Mo’Nique provided much needed tough love to contestants. Her heated debate with Larissa ‘Bootz’ Hodge will go down in the reality television history books. In the tension filled heart-to-heart moment, Mo’Nique shares that life as a Black woman is difficult but to pick and choose your battles wisely as there will always be one around the corner to suit up for.

Before OWN’s original series, Black Love, Mo’Nique had long before pulled back the curtain on what marriage is. Alongside her husband, Sidney Hicks, Mo’Nique continues to chip away at the idea of traditionalism as the standard. Love is an intentional choice. Marriage is a partnership. On the couple’s podcast Mo’Nique & Sidney’s Open Relationship they share more about their journey to this conclusion.

Mo’Nique’s advocacy for body positivity wasn’t just limited to size. For years, Mo’Nique refused to conform to the beauty standard of shaving. Revealing on the Wendy Williams Show in 2014 that she only recently began shaving because her body hair was beginning to thin out in patches so at the request of her son, she began shaving.

Simply put, Mo’Nique deserves her flowers across the industry. Unfortunately, this is not likely going to happen until she’s no longer with us. But in the words of Mo’Nique, “sometimes you have to forgo doing what’s popular to do what’s right”. So, in this moment, I speak for myself, a brown-skinned, plus size, say it like it is woman, product of the inner city, thank you Mo’Nique for being unapologetically you. In doing so, you’ve paved the way for me to just be me. I am forever grateful to you. You are loved but most of all appreciated.